I attended eConsultancy’s Future of Digital Marketing Conference this month, feeling like I was playing truant from my usual pharma industry to learn what’s happening ‘out there’ in the less-regulated ‘real world’.  However, some of the challenges discussed were very familiar.  Here are my takeaways:

You are what you wear

Sarah Bentley (@saraheb) kicked the conference off wearing a Tweetskirt, which all the girls immediately coveted.  Its LED patterns changed, responding to tweets.  Not sure of the application, but it was cool.

At the end of the day Marcus Mustafa (@dacrumb) showed a tableaux of wearables, from glasses used by Virgin check-in agents to welcome passengers by name, to self-protecting underwear that detects ‘rough’ handling and electrocutes the attacker.

Of course there are many applications in our own area of health and Marcus showed several – the ubiquitous FitBit, contact lenses that detect blood sugar levels and send signals to an insulin pump, and beyond wearables to ingestables like electroceuticals, drugs with chips that detect body chemistry.

This was the hot topic of the day, introduced by Sarah who pointed out the digital native generation will not tolerate poor experience – they expect seamless usability and immediate gratification.  Sarah’s 5-year-old daughter single-handedly bought a Hello Kitty Umbrella online, only letting her mother know of the purchase because she was cross it had not arrived immediately.

Anthony Mayfield (@amayfield) pointed out that we used to organise around the message, but now we must organise around the consumer and their needs. Newer businesses are doing this, he said, because they don’t have legacy systems or legacy thinking.

Jason Mesut (@jasonmesut) focused on user interfaces and pointed out that they are not just ‘web-based’ – but include, ‘knobs, knockers and switches’ too.  Think about your user as a human, not a customer, he said, and used the beautiful video from Corning ‘A Day Made of Glass’ to illustrate the opportunity to create immersive experience.

He asked us to ‘prototype out loud’ and make mistakes in order to learn what works.  There is no one ‘customer journey’, Jason said, we must find ‘moments of truth’ throughout the ecosystem.

Minter Dial (@mdial) showed a number of examples of retail immersive experience, with mixed success. Vanquish store in Tokyo lets you take a funky picture of yourself using a mirror and uploads it to their Facebook page – you Like the page to share it.

But execution is everything, Minter said, citing an example of another retail app, to ‘build your dream bra’ in a lingerie store, failing to work correctly. The problem is that management doesn’t test the user experience, he said, they think it is someone else’s job.

The importance of data to drive experience was clear.  Rapid test-and-learn is critical to create the right product for customers, said Wendy Tan White (@wendytanwhite). This point was picked up by Ottokar Rosenberger (@OttokarR) in a session on agile marketing – we should have KPIs around the speed of iteration as well as customer outcomes.

In our effort to drive agile marketing with data we must focus on consumers – ‘we have to start respecting people and their attention’ said Anthony, we are all turning into ‘cryptoconsumers’ protecting our data carefully. We are increasingly being analysed, from black boxes in cars for insurance companies (@agwp) to the Watson computer searching 29 million PubMed articles for potential cancer cures (@ibminteractive).

As Otto said ‘We should be data driven to optimise the curve but passion driven to shift the curve completely’.

Doug Kessler (@dougkessler) gave a thought-provoking talk about the future of content marketing, pointing out the blurring of content and advertising, but the counter-trend of the ‘return of the editor’ as providers try to build trust.  He also pointed out that when the head and heart combine – strong rational argument with huge emotional hook – you have a ‘home run’ of impact, using the Shark Attack stats as a great example.

We can use this more in our health campaigns.  We are data-rich but often forget that health issues can invoke a strong emotional response, for patients, caregivers and sometimes healthcare professionals.

Neil Perkin (@NeilPerkin) agreed that editing and curation is key – ‘it’s not about information overload, it is filter failure’ and identified 3 pillars of content curation – Professional, Algorthimic and Social. 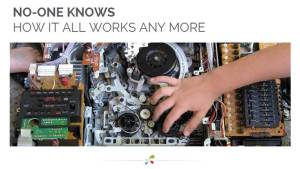 mic filters, the Hummingbird release of Google has brought this to a new level, with an algorithm that provides answers to questions (‘What time is the match on?’) and the algorithm learns as it goes – even the Google engineers don’t know how it works anymore, pointed out Will Critchlow.  (@WillCritchlow).

Malcolm Coles (@malcolmcoles) illustrated Trinity Mirror Group’s approach to contextual marketing in their Us Vs Them Campaign – instead of pushing content the campaign builds irreverent engagement around topical issues.  For example, they asked people to find Damascus on a map just before the US bombed it.  Another tactic was their ‘how much does the Daily Mail hate me’ game.

Barney Leohnis gave us ‘a glimpse inside the incredible, wild and exciting world of Digital China’. Every aspect of Chinese life is being transformed and digital is the enabler of this change. The internet is seen as the route to the outside world and China has 3 of the top 7 internet companies by value. Taobao the ecommerce site, delivers more packages per year than UPS worldwide, and ‘it’s everyone’s dream to make a mint on Taobao’.

In a country of state-controlled newspapers the internet is the most trusted channel for product information and phone start up Xiaomi sold 100,000 phones in 83 seconds through social flash marketing. The technology isn’t cheap but its desirability is clear – people will eat rice for 4 months to be able to afford an iPhone.  The empowerment is so valuable that, in Barney’s words, ‘the Chinese don’t give a crap about user experience’.

The digital empowerment has many facets – for example the ‘Diaosi’ movement – a social media-fuelled rebellion against the overwhelming pressure to succeed in China’s emerging middle-class with hot-housed education and huge expectations of the single child in the family.

Transformation was a theme throughout the event with Anthony pointing out that the CEO must lead the transformation, and several speakers agreed with him that digital transformation is not a campaign, it is a whole new thinking – about ‘inbound marketing instead of ‘outbound’.

Sarah insisted the CMO must take ownership – only 1% of companies going through a digital transformation have the CMO in charge of it – and predicted that in a few years digital should be 75% of marketing spend.

The recently-leaked New York Times internal Innovation report was highlighted by Will as illustrating that media companies are still struggling to transform even though they recognise the importance.  Abstract is here: http://www.capitalnewyork.com/sites/default/files/Innovation%20Report.pdf

In the pharmaceutical industry, where risk-aversion is often rewarded, promotion is highly regulated and a large portion of spend is still invested in a highly-qualified sales force, transformation of mindset and model remains a challenge.

We have the tools but are we organised to use them?  This was the question coming through. This point was summed up by the quote Jason borrowed from William Gibson:

Also see 48 quotes from FODM and a selection of the FODM presentations on YouTube.